Efficient and intelligent plant concepts
from a single source.

Learn more about our plants for the production of AAC blocks.

The manufacturing of autoclaved aerated concrete products demands high standards for mixing and dosing of the aggregates, the control of the fermentation process and the control of each production step. Masa's aerated concrete installations are proven advanced technology processes, designed according to customers specific requirements. This approach allows complete solutions to ensure highly efficient, optimised processes resulting in consistent final product quality.

Do you want to learn more about the Masa AAC manufacturing process? Inform yourself using the interactive step by step system, as to how a AAC block is produced from various raw materials.

The precisely measured raw sand and the required quantity of water are fed into the wet ball mill where the raw sand is processed into sand slurry. The consistency of the sand slurry is defined exactly in terms of sand slurry density and grinding fineness. The throughput of the mill is adapted to the production capacity of the AAC factory in respect of the required maximum density of the aerated concrete. The milling process itself is carried out by means of grinding bodies (Cylpebs or steel balls).

After the grinding process, the sand slurry is pumped into sand slurry tanks for storage. Integrated stirrers serve to maintain the optimum consistency. 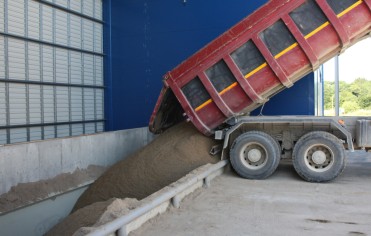 All additional raw materials - lime, cement, gypsum (anhydrite) and aluminium powder/paste - are stored according to safety regulations, partly pre-mixed, weighed and fed into the Masa mixer together with sand slurry and water. The mixer itself is equipped with all required dosing and weighing devices and a temperature measuring device. The mixer is installed above the casting device.

When the mixing process has been completed, the casting device feeds the mixture into a casting mould. If required, the mixer as well as the casting pipe can be rinsed automatically with water. The rinsing water is either collected in a rinsing water tank or used for the preparation of the return slurry.

The complete mixing tower with its different levels is characterized by its compact design.

The complete mixing process is controlled and supervised via the Masa mixing plant control system . 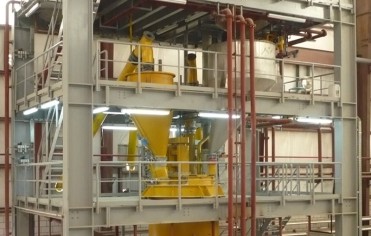 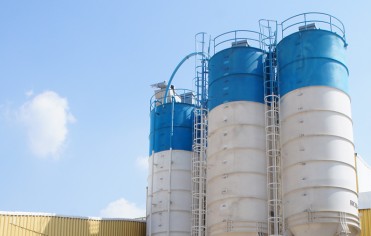 A transfer platform transports the filled casting mould to the closed and heated pre-hardening area, also called the fermentation area. Due to the alkaline reaction of the aluminium in the slurry, many small bubbles develop in the compound. At the same time, the cake begins to harden. After a waiting time of approx. 2.5 – 4 hours, the preset "green strength" (cutting strength) is reached. The waiting time depends on the temperature in the fermentation area, but also on the quality of the raw materials used and the chosen recipe. 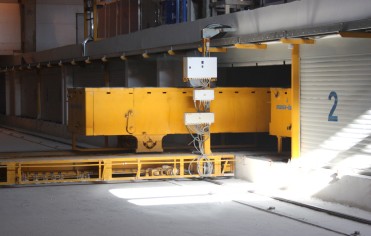 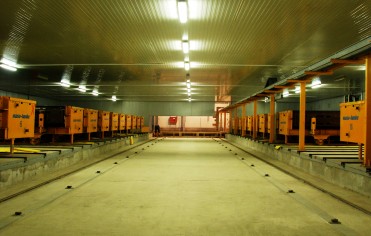 Transport to the cutting line and removal of the mould

When the cutting strength has been reached and/or the preset waiting time has elapsed, the fresh ("green") aerated concrete cake is transported to the Masa cutting line while the casting mould is still closed. 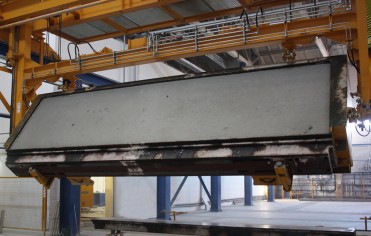 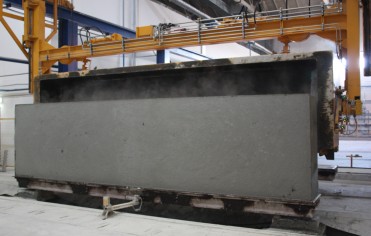 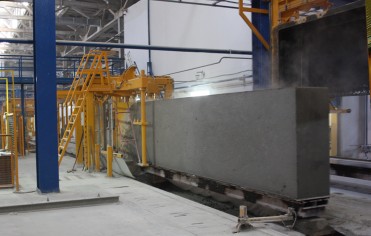 Reassembly and oiling of the casting mould

The empty casting mould is transported to the return track where a side plate is inserted so that the casting mould is complete again. It is then tilted back by 90° so that the opening is to the top. The complete mould is placed on the track leading to the mixing plant. The necessary oiling of the mould before it is re-filled can be carried out manually or automatically with the the latest generation of the Masa oil distribution system .

The cutting line comprises several stations that are installed above a trench to collect the cutting waste.

On precisely placed rails, the cutting car moves the side plate with the fresh aerated concrete cake through the pre-cutting plant / tongue and groove profiling station , the longitudinal cutting plant , the cross cutting plant/recessed grip mill and the blowing-off station .

As the aerated concrete block stands upright, it is possible to use short cutting wires. These enable highly precise geometrical cuts that comply with current European standards.

All waste material generated in the cutting process is collected in a basin underneath the cutting line, recycled , and returned to the production process.

The optimum coordination of the individual components results in a smooth and efficient production process.

In the transport plant, the side plate with the cut aerated concrete cake is placed on the tilting table. The cake is immediately turned by 90° and placed on a hardening grid. 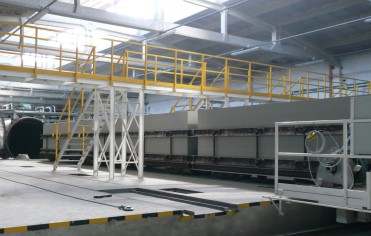 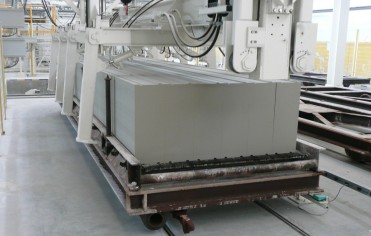 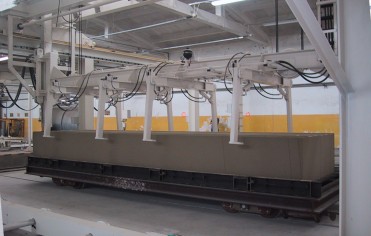 Transport platform and waiting area in front of the autoclaves

Heating the waiting area prevents the fresh aerated concrete cakes from cooling and has a positive effect on energy consumption during the hardening process.

The aerated concrete is hardened under steam pressure in special, sealed pressure vessels, the autoclaves, thereby achieving its final strength.

The various autoclaving steps can be determined individually in the Masa autoclave control system . The complete hardening process runs automatically and is recorded continuously.

The used steam for the hardening process in the autoclaves is generated in a steam boiler plant. Usually, high-capacity steam boilers that are operated by gas or oil are used to generate the steam. 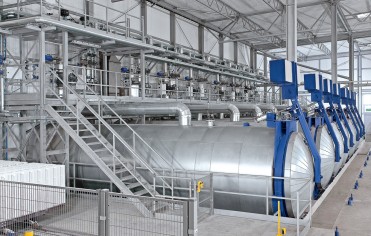 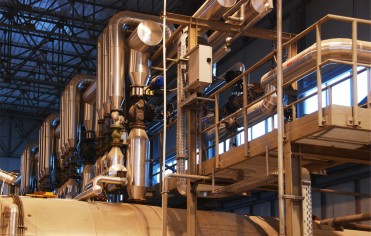 When the hardening process is completed, the aerated concrete blocks are ready for use.

From the transport platform, the hardened aerated concrete cake is transported to the re-tilting table by a second transport plant. There, it is tilted by 90° and moved on to the separating machine.

The transport plant transfers the empty hardening grid to a roller track. This transports the brushed-off and slightly oiled grids back to the tilting table.

The empty hardening cars are also transferred by the transport plant and returned to the tilting table.

Depending on the raw materials used, the aerated concrete blocks tend to stick to each other. Therefore, Masa recommends the use of a separating machine for the hardened blocks. The main advantage is that delicate products with low density and low wall thickness can be separated gently. Compared to other systems, this procedure considerably reduces the rejection rate.

After that, a transport conveyor moves the aerated concrete blocks to the block transfer device.

The Masa block transfer device takes the cut blocks from the transport conveyor and places them on wooden pallets that are provided by a pallet magazine.

In case where the blocks have been cut to different sizes in the longitudinal cutting plant, the Masa block transfer device is able to sort the blocks so that each type can be packaged separately. 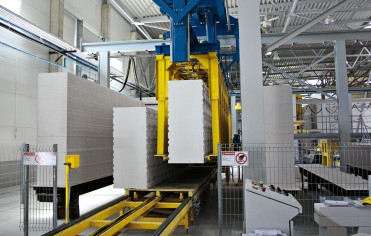 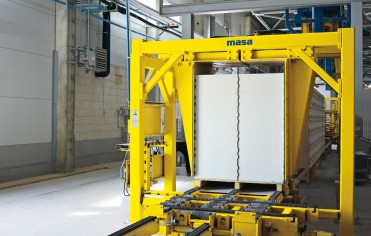 Therefore, the finished product has to be packaged so that it is protected from dirt and moisture before it is removed from the factory. Depending on the plant concept, the packaging process can be carried out automatically or semi-automatically.

The filled transport pallets have to be bundled, preferably with plastic straps, for safe transport and storage.

Other individual packaging options, eg. with stretch film or shrink-wrapping plants, can be integrated into the packaging line as per customer requirements.

Why a manufacturing plant from Masa?

Did we catch your interest? Contact us and send your request.